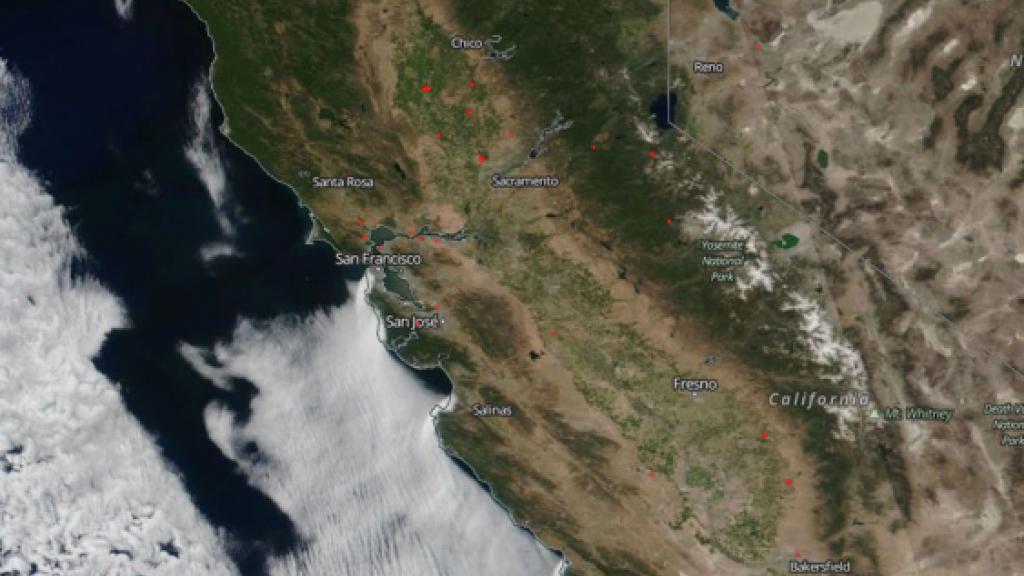 WILD FIRES: Last year was a dark year for forest fires - and already, even though July isn´t over, the forest fires have been out of hand in California and other parts of the US, and in unusual places like Sweden, where the summer has been the hottest and driest in 260 years.

The Suomi satellite program monitors and publishes images from space on the NASA Home Page about the wild fire situation in select places.

Cover Photo: (Above) This satellite image shows where wildfires, outlined in red, are burning in California on Thursday June 14, 2018. On the heels of the most destructive wildfires on record in California, there had already been more than 1,800 fires, as of June 10, 2018, in the state.

Photo (Below)The Dollar Ridge Fire in the US (image below) was reported around 1 p.m. on July 1, 2018. Responding resources made initial attack and the fire spread quickly in steep terrain and high winds. Overnight the fire had grown to 7,000 acres. The cause is believed to be due to human activity and is under investigation to determine the actual cause.  The blaze is located 4.5 miles southeast of Strawberry Reservoir and approximately 50 miles southeast of Provo. 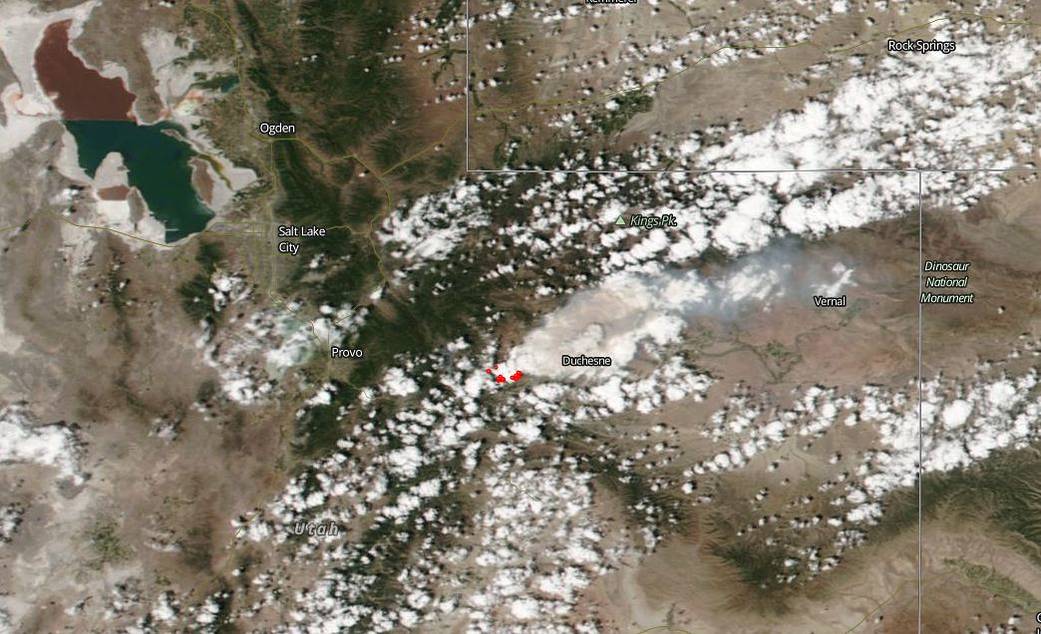 This natural-color satellite image was collected by the Moderate Resolution Imaging Spectroradiometer (MODIS) aboard the Terra satellite on July 02, 2018. Actively burning areas, detected by MODIS’s thermal bands, are outlined in red. Even with the heavy cloud cover in this image, the brownish-colored smoke rising from the fires is still very visible in this satellite image. NASA image courtesy NASA/Goddard Space Flight Center Earth Science Data and Information System (ESDIS) project.  Caption:  Lynn Jenner with information from Inciweb.

The Suomi National Polar-orbiting Partnership or Suomi NPP, previously known as the National Polar-orbiting Operational Environmental Satellite System Preparatory Project (NPP) and NPP-Bridge, is a weather satellite operated by the United States National Oceanic and Atmospheric Administration. Originally intended as a pathfinder for the NPOESS program, which was to have replaced NOAA's Polar Operational Environmental Satellites and the U.S. Air Force's Defense Meteorological Satellite Program, Suomi was launched in 2011 after the cancellation of NPOESS to serve as a gapfiller between the POES satellites and the Joint Polar Satellite System which will replace them. Its instruments provide climate measurements that continue prior observations by NASA's Earth Observing System.

The satellite is named after Verner E. Suomi, a meteorologist at the University of Wisconsin–Madison. The name was announced on January 24, 2012, three months after the satellite's launch.[6][7]

The satellite was launched from Space Launch Complex 2W at Vandenberg Air Force Base in California by a United Launch Alliance Delta II 7920-10C on October 28, 2011. The satellite was placed into a sun-synchronous orbit 824 km (512 miles) above the Earth.[8]

Photo: (Cover Above) Snowfall and fire are juxtaposed in this NASA's Suomi NPP satellite image of China and Russian captured on March 21, 2018.  It is unclear whether these are deliberately set fires for the purpose of clearing fields for planting or if they are wildfires.  The fires span across the border from China to Russia.

Video: This video from 2016 explains how the NASA Suomi satellite program for wild fire detection works.

THE INFORMATION BELOW IS FROM EARLIER THIS SPRING AND THE GRAPHS WERE LAST UPDATED MARCH 25 - 2018.

Kaliningrad, Russia has also seen an increase in wild fire activity in recent days.The Suomi NPP satellite captured this image of dozens of hot spots scattered throughout the Kaliningrad Oblast, Russia landscape which is the westernmost point of Russia.

Each hot spot, which appears as a red mark, is an area where the thermal detectors on the VIIRS instrument recognized temperatures higher than background. It is unclear if these are wildfires that have broken out or if they are agricultural fires that are used by farmers to clear fields in anticipation of the upcoming planting season. What is clear is that the fires are contained within Kaliningrad as evidenced by this satellite image.

Surrounding these hotspots are large expanses of snow which cover parts of Poland, Belarus, and Lithuania.

Mid-March saw a lot of fire activity in the southeastern United States, mostly in Oklahoma; Georgia and Texas. The National Interagency Fire Center (NIFC) released a situation report on March 16, 2018, which shows that the southern area (which includes the states in this Suomi NPP satellite image) had 66 incidents of wildfires recorded that affected 83,022 acres.

However, the majority of fires in the southeastern U.S. were not wildfires, rather they were prescribed fires set by various governmental agencies such as the National Park Service and U.S. Forest Service for many purposes.  After years of fire exclusion, an ecosystem that needs periodic fire becomes unhealthy. Trees are stressed by overcrowding; fire-dependent species disappear; and flammable fuels build up and become hazardous. The right fire at the right place at the right time.